The “Sergio Vacchi Foundation” has its headquarters on the southern Sienese hills at the Grotti Castle, which was built on an ancient Etruscan settlement.
In 1221 the tower was recalled as place of origin of Orlandino di Azzo, an active business man, and later on belonged to the patrician family named Ugurgieri until 1687.
Other news attest that it was conquered and devastated with the annex houses and the nearby Torre delle Strine by the Austrian-Hispanic soldiers during the last war against Siena and Montalcino.
In the 19th century’s the magnificent castle, whose “U”-shaped plan and shoe-shaped foundations make it look like a hybrid building between a fortalice and a palace, was transformed into a country house for the Ballati-Nerli Marquises and also embellished with tree-lined roads and gardens.
In the last century it became one of the properties belonging to the Piccolomini family. It was recently purchased and restored by the painter Sergio Vacchi with the intention to create an international centre for the arts.
In the winter 2006 the Italian garden and the English park belonging to the Foundation were restored thanks to a partial contribution of Tuscany Region: the gardens were embellished with more boxes and an unique and suggestive lightning system was able to give further prominence to the magic of this place, its rare plants growing in the park and in the 17th century’s pond.

You can order the catalogue and all the Foundation pubblications.
For more information:
Tel. +39.0577.377181
info@fondazionevacchi.it
Catalogues Collection 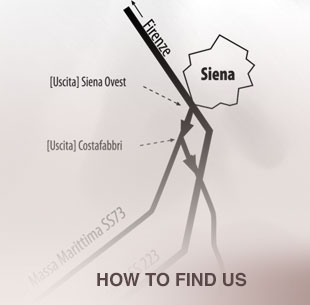 This website uses cookies to improve your experience while you navigate through the website. Out of these, the cookies that are categorized as necessary are stored on your browser as they are essential for the working of basic functionalities of the website. We also use third-party cookies that help us analyze and understand how you use this website. These cookies will be stored in your browser only with your consent. You also have the option to opt-out of these cookies. But opting out of some of these cookies may affect your browsing experience.
Functional
Functional cookies help to perform certain functionalities like sharing the content of the website on social media platforms, collect feedbacks, and other third-party features.
Necessary
Necessary cookies are absolutely essential for the website to function properly. These cookies ensure basic functionalities and security features of the website, anonymously.
Others
Other uncategorized cookies are those that are being analyzed and have not been classified into a category as yet.
Performance
Performance cookies are used to understand and analyze the key performance indexes of the website which helps in delivering a better user experience for the visitors.
Advertisement
Advertisement cookies are used to provide visitors with relevant ads and marketing campaigns. These cookies track visitors across websites and collect information to provide customized ads.
Analytics
Analytical cookies are used to understand how visitors interact with the website. These cookies help provide information on metrics the number of visitors, bounce rate, traffic source, etc.
SAVE & ACCEPT
Powered by